We have moved the Plano office from the 660 North Central Expressway location to:

Also, we were nominated for the 2019 Business of the Year Award with the Greater East Dallas Chamber of Commerce.

We did not receive it but at least we were in the running in this great networking group!

Congratulations to Business of the Year winners:

Business of the Year 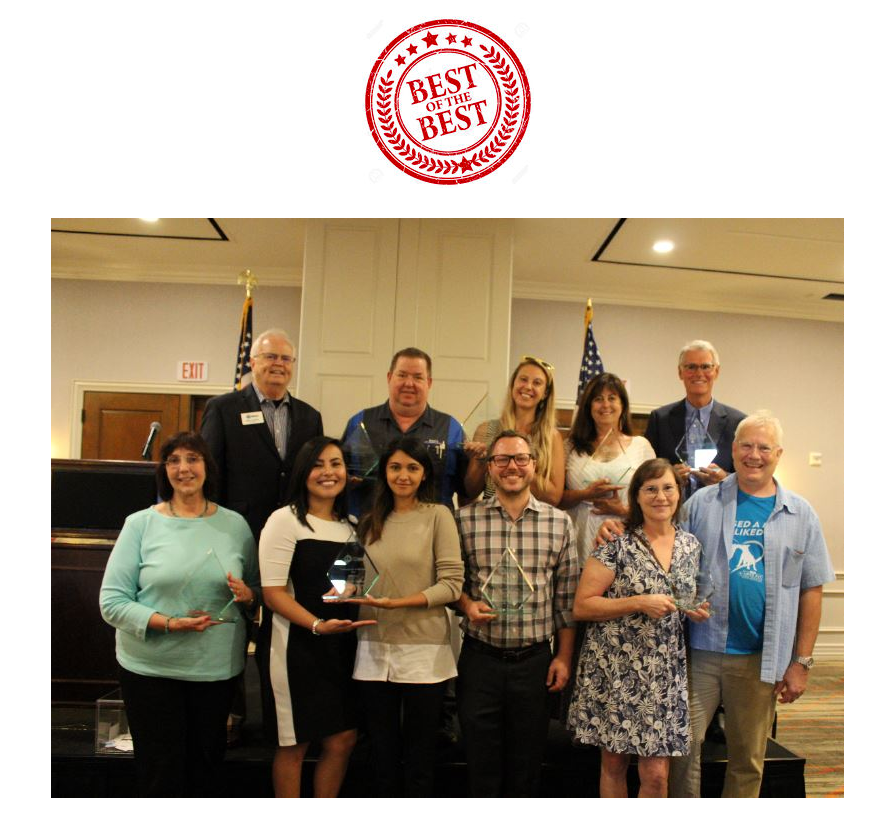 Are You Ready for July to End and August to Begin?

It is hard to believe that in a couple of weeks (in some cities) school will be starting and families will be looking for some last minute “Stay Vacay” fun. Here are a few suggestions for some nearby Dallas / Fort Worth vacay fun:

Only about 35 miles north of downtown Dallas, McKinney offers a great getaway for the day or the weekend. Plan to spend some time discovering the shops, boutiques and outside dining options in and around the charming downtown square, anchored by the courthouse. Favorites include Cadillac Pizza Pub, Landon Winery and the Sweet Spot bakery and coffee shop, which has the best scones around. Many of the establishments invite you to linger with live music during the evening. Wildlife and hiking fans will enjoy the Heard Natural Science Museum and Wildlife Sanctuary with its 289-acre nature preserve and miles of nature trails, plus a plant garden, butterfly house and indoor exhibits.

Halfway between Dallas and Austin is the college town of Waco, home to a world-class zoo and several museums for children and adults alike. Adjacent to the Brazos River, the 52-acre zoo is spread out and has lots of shade and splashing waterfalls, so it’s a perfect antidote to the Texas sun. Be sure to check out the Komodo dragon and Galapagos tortoises, along with the orangutans and Sumatran tigers. The Mayborn, on the Baylor University campus, is especially fun for children because of its interactive stations and displays. Adults will also enjoy the natural history, especially the Waco Mammoth exhibit. Here, guests can walk on a see-through floor to look down upon casts of the Columbian mammoth bones displayed exactly as they were unearthed at the Waco Mammoth Site, just five miles from the Baylor campus. Visit the Collin Street Bakery and enjoy a slice of pie, a macaroon, or their famous fruitcake. For those in search of a bit more protein, Rudy’s BBQ will certainly hit the spot. There’s ‘Sissy Sauce’ for those who prefer a little less kick.

One hour southwest just off Highway 377 is the quaint town of Granbury. Spend the day shopping and exploring the stores and old jailhouse on the square. Stay in one of the many bed and breakfasts or inns to take full advantage of the nightlife, including ghost tour and the historic Brazos Drive-In movie theater. Whatever you do, don’t miss a production at the beautifully renovated 1886 Opera House. If you are there on a Saturday afternoon, check out the widely popular Revolver Brewery.

While most people head to Tyler (just two hours east of Dallas on I-30), for the roses, there’s plenty more to discover while in the area. Just a few miles south of town, the American Freedom Museum, located on the campus of The Brook Hill School in Bullard, has an expansive collection filling 15 galleries. The Hall of Presidents includes a signed document by every president, from George Washington through to President Obama, and the Hall of Freedom chronicles the major conflicts in which the United States has been involved since the Revolutionary War. Ten minutes east of the museum is Kiepersol, an estate winery, distillery, restaurant and bed and breakfast. Founded by South African native Pierre de Wet, the estate is well known for its quality and service. Wine tastings are at one’s leisure, and both wine tours and distillery tours are offered at designated tour times with no reservations needed. Stay for dinner and enjoy steak or seafood while surrounded by the two-story wine cellar with hundreds of wines from around the world.

Lakewood Title Company would like to wish everyone a smooth start into August and everything it might bring. Stay cool! 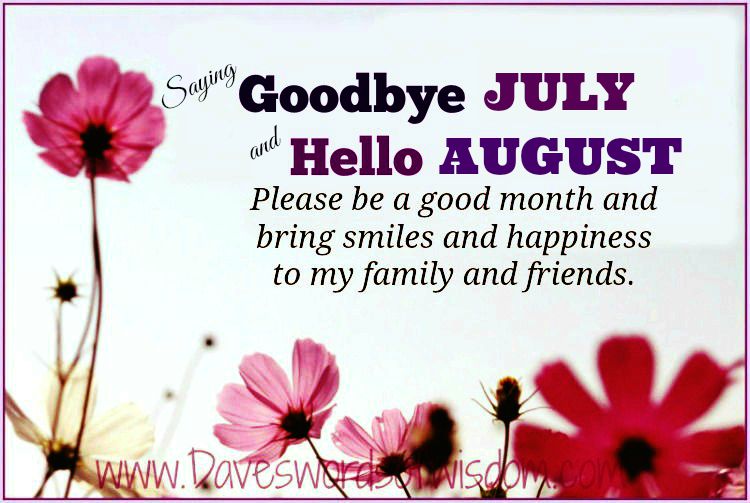 Happy Birthday to our Customers with June Birthdays and Welcome July 4th.

Do you have a June birthday? Before June ends……. we would like to wish all those with June birthdays a wonderful Happy Birthday Month, Week and Day! 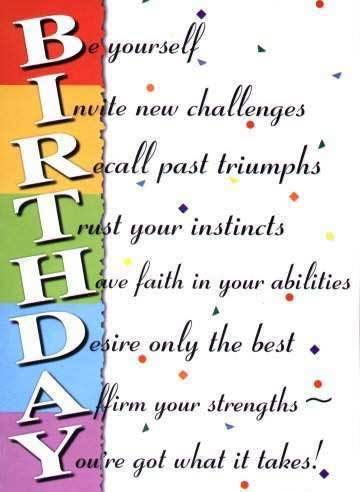 Lakewood Title would also like to wish you a wonderful July and the upcoming July 4th. 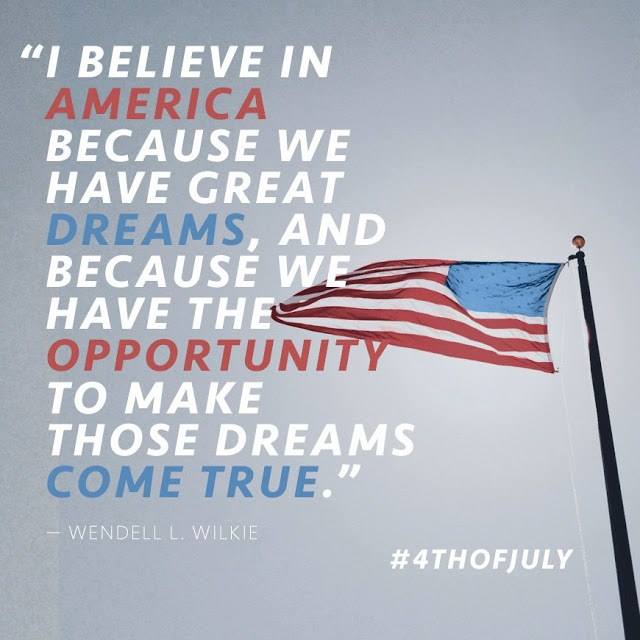 Posted in About Us, Title Company | Leave a comment

We are so pleased to have our title office location in Anna, Tx.

We are so pleased to have a title office location in Anna, Tx.

Lakewood Title is a wonderful company to work with.

“Lakewood Title is a wonderful company to work with. They stand out in my mind because of how willing and available to help me or answer any question I might have in the process of a refinance due to divorce. During times such as these (divorce) when doing anything is difficult, it’s a true blessing to have people who really care. That’s the experience I had with Lakewood Title.” ~ Google Reviewer

Father’s Day is Sunday, June 16, 2019. How do you celebrate your father (or, honor his memory)? Did you know that Father’s Day is celebrated on the third Sunday in June in the United States, United Kingdom, Canada, India, and a number of other countries around the world?

When purchasing an online gift for DAD……consider using Amazon.com/smile and choose Soup Mobile as your charity. Each time you shop, always go to Amazon.com/smile. Bookmark it!!

If so, have I got great news for you. If you go to Amazon.com/smile and choose SoupMobile as your charity of choice, every time you shop Amazon, a donation of 0.5% goes to SoupMobile.

Make sure you’re signed up for AmazonSmile and select SoupMobile,Inc. as the beneficiary!

Amazon donates 0.5% of the price of your eligible AmazonSmile purchases to The SoupMobile. AmazonSmile is the same Amazon you know. Same products, same prices, same service. To support The SoupMobile, make sure you start your shopping at smile.amazon.com

How To Prepare Your Home For Spring!

Spring cleaning! Now is the time to give your house a deep clean.

Go ahead and have a little fun! Plant seasonal flowers to add color to your landscape. Flowers that thrive in spring in North Texas are cosmos, marigolds, zinnias and pentas.

The month of March isn’t just about celebrating St. Patrick’s Day and the start of Spring.

Welcome to the third month of the year—or, if you were born before 150 B.C., the first! According to the oldest Roman calendars, one year was ten months long, beginning in March and ending in December. It may sound crazy…………. READ MORE https://www.rd.com/culture/month-of-march-facts/

It’s the best month for basketball (but worst for productivity)

For civilians, on the other hand, March is known for one thing above all others: brackets. March Madness, as the NBA calls it, runs from March 11 to April 2 this year, and the safest bet you can make is that lots and lots of people will be distracted…… READ MORE https://www.rd.com/culture/month-of-march-facts/

March Madness is a cherished time to reacquaint oneself with the couch, especially during the early tournament days when dozens of games unfold consecutively. In other words, it’s the perfect week to recover from a vasectomy! READ MORE https://www.rd.com/culture/month-of-march-facts/

March was named for war—and lives up to its title

So, if so many months were named for their Latin numbers, why wasn’t March called… unumber? Firstly, because that sounds ridiculous, and secondly, because the Gods had dibs on it……READ MORE https://www.rd.com/culture/month-of-march-facts/

Beware The Ides of March unless you’re a cat

We’ve all heard it uttered, but what does “beware the Ides of March” actually mean? On the Roman calendar, the midpoint of every month was known as the Ides. The Ides of March fell on March 15th. This day was supposed to correlate with the first full moon of the year (remember, winter didn’t count then) and marked by religious ceremonies……. READ MORE https://www.rd.com/culture/month-of-march-facts/

March 1: As the saying goes, March comes “in like a lion, out like a lamb.” That was certainly true on March 1st, 2007, when a detachment of 170 Swiss infantrymen accidentally invaded neighboring Liechtenstein when they got lost on a training mission.

March 2: NASA astronaut Scott Kelly returned from space after one full year, setting a new record for the longest uninterrupted trip to space.

March 5: Thirsty bros observe Cinco De Marcho, initiating a 12-day drinking regimen for anyone who wishes to “train one’s liver for the closing ceremonies on St. Patrick’s Day.” By the way, this is why we wear green for St. Patrick’s Day.

March 6: The Day of The Dude encourages participants to honor The Big Lebowski by takin’er easy all day, man.

March 17: St. Patrick’s Day turns the Chicago River green, and too many livers cirrhosis-damage-brown. (You’ll want to check out these St. Patrick’s Day “facts” that are actually false.) And on this day in 1973, Pink Floyd’s “Dark Side of The Moon” first hits the Billboard Top 200 chart at number 95. A mere 14 years later (736 chart weeks, to be exact), it finally leaves the top 200 for the first time, setting a still-unbroken world record. (You’ve got a long way to go, Adele.)

March 20: The sun shines on the equator for the Vernal Equinox, giving us a near 50-50 split of day and night.

Lakewood Title annually supports the SoupMobile Code Blue Drive for Christmas by donating coats, blankets and gloves to the Lakewood branch of Veritex Bank. As one of the biggest, annual contributors, Veritex invites us to have our picture taken with the Bank representatives when the items are delivered.

Posted in About Us, Title Company, Title Insurance, Uncategorized | Leave a comment

#GivingTuesday is happening right now, in 150 countries around the globe.

“A CUP OF COFFEE??? Did you know today is GIVING TUESDAY? Gee whiz, what’s that all about you may be asking? It’s a national day of giving to your favorite charity. It’s always the Tuesday after Thanksgiving & in many ways it’s a rebuttable to the unbelievable amount of money spent over the Thanksgiving holiday on consumer goods. In essence Giving Tuesday is a reminder to all of us that it’s not just about all of the stuff we can buy. What’s the SoupMobile asking you to give to us this GIVING TUESDAY? The answer is $5.00. Yes Five Dollars—about the cost of a cup of coffee at Starbucks. We are asking you to help the SoupMobile feed the homeless in Dallas, Texas by joining the SoupMobile Dream Team for $5 per month. And as our way of saying thank you when you join the Dream Team we will send you an impressive SoupMobile Commemorative Coin as a treasured keepsake. More details on the Dream Team at: http://www.soupmobile.org/pages/dream-team. God bless you all. Signed, David Timothy, a.k.a. SoupMan. p.s. Remember to follow the SoupMobile on social media & see our weekly announcements in the Sunday Metro Section of the Dallas Morning News. Also watch SoupMobile Church on the UAN Christian TV Network Channel 26.3 every Sunday morning at 7:00AM (CST).” ~ www.soupmobile.org 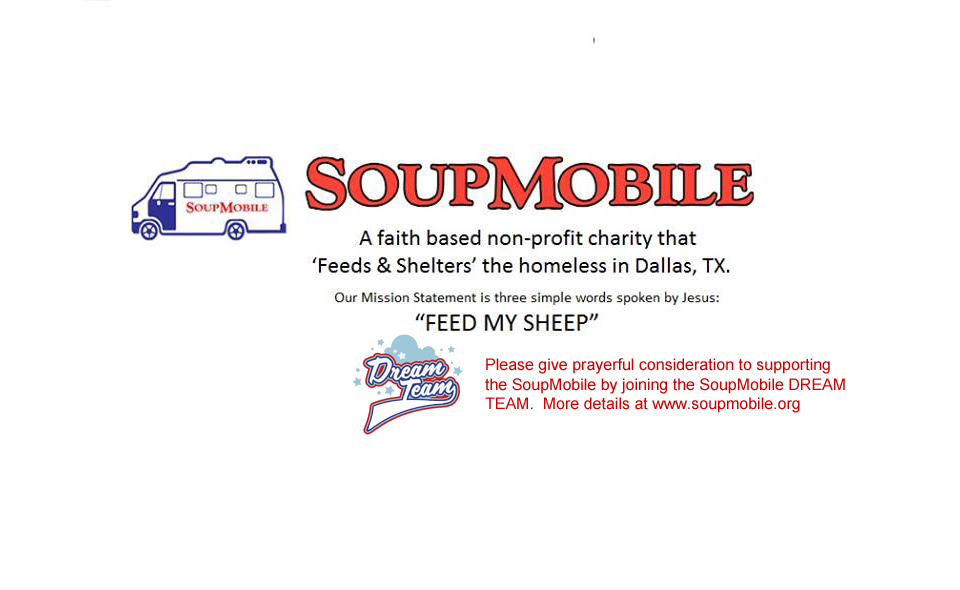